This sit, in a remote place near Villeneuve sur Lot, had been confirmed in spring, but we kept in touch with Eva, the owner, during all summer.  She knew I had owned and sat cats but that I had only got 2 former experiences in poultry. My husband -shame on him- had owned hens when he was much more younger,  but they were raised to be killed.
These ones were pets, had names, they were not supposed at all  to be eaten !

Keeping them was a pleasure as they were all day free in the big garden. With the radio on, just in case a hunter would be around... We had to lock them only at night to prevent them from being slaughtered by a fox.

Poulkirit  was not a beauty for sure  with her red neck without any feathers, I thought she had been attacked but no, it was her breed !
She was very friendly, delighted when I opened her house in the morning, following me hoping I would throw more grains. Cackling all the time, giving us an egg every two days.
I used crafty tricks to attract  Poulkirit to get into the hen house -she had refused to share with the younger hens-  at sunset. 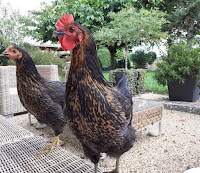 Poulinda & Poulyvette, the young  black and green  ones were a few months old, too young yet to  lay eggs.The 3 hens kept us company during our breakfast taken on the terrace. They stayed around us when we were reading outside or watering the garden. They were all very greedy, used to get some grated cheese added to their usual grains that  all birds around enjoyed too. It was open bar on the grass ! 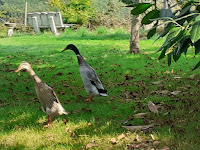 The two young indian runners did not need to be locked up at night, they hid themselves under the hedges.Klaxon (the male duck ) and Sonnette (the female) chased all the hens away when food was being served ! They often took baths in 3 pastic trays displayed on the lawns, ignoring totally a pool  bought for them. On our last day they finally jumped into the real pond ! Instinct as they had never met their parents !!! 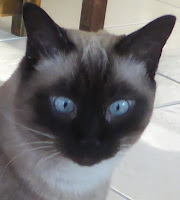 Ti'chat , a pretty  fat siamese, with a funny look and blue eyes, was quite shy, she stayed in her mistress's wardrobe for two days, showing up only at meal time. Being 13 years old, that cat did not play much, dared come by our  side when we watched TV. She slept a lot, I scarcely ever  heard her purr or meow... She was waiting for her masters, did not pay much attention to the poultry. More curious of her that she was of them... 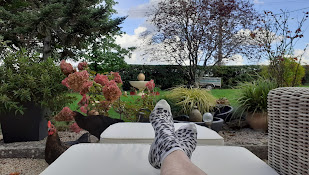 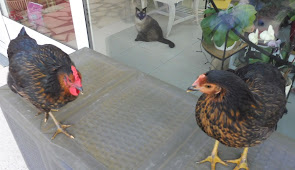