From my childhood until summer 2008 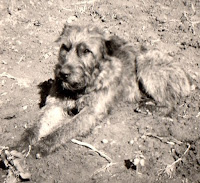 Since I was born, I've always lived with dogs around me. Bigger than I when I was a small baby girl !

Yankee, a Bouvier des Flandres was agressive if anybody else than my mom approached my pram !

When I was 9, Yankee has been shot by a farmer. The man was fed up to see his hens slaughtered... 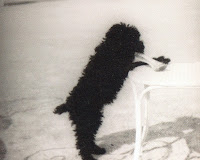 When I was 19, I owned a small black poodle, called Schproumpf.

He followed me everywhere, even in university. Which would not be allowed today. 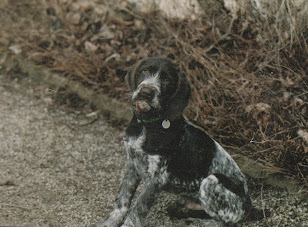 We knew this hunting dog would feel fine in Paris, as we would go with him every weekend to our country home.

There,  he could run, jump into the river facing our little house to pick up sticks of wood, play for hours in our garden. 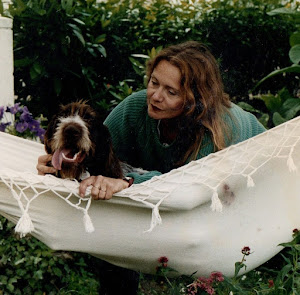 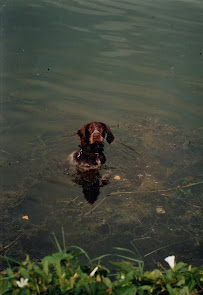 Jim had to be put in pension when we were going abroad. Unfortunately, we could not let our swappers walk him in the streets of the capital, or even in the country : our dog was too often agressive with other dogs and even with human beings !

When we dropped Jim the first time in a recommanded kennel, we were scared he would feel very unhappy. But when we dropped him there the second time, he did not try to jump in our arms : we felt relieved. He seemed pretty enthusiastic to see again some of his furry friends ! And as he seemed to like croquettes we stopped making him nice doggy meals... 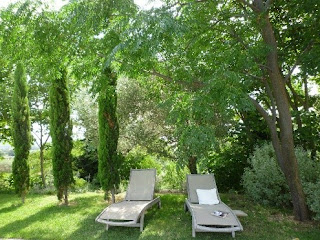 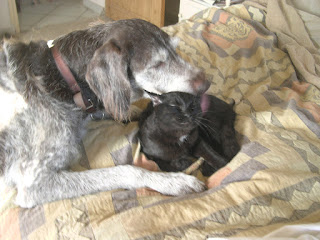 We had noticed Jim was very fond of cats  when we visited friends who owned some feline. So we offered him a kitten. To keep him company. even if he was used to stay alone.

Leo, quite distant with us, loved instantly to sleep with him and looked very happy to be cuddled all day 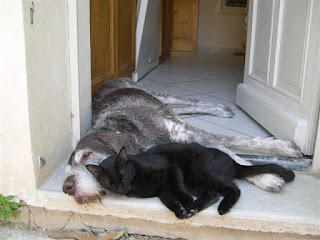 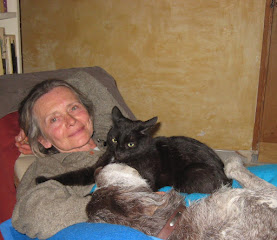 Jim passed away in may 2008 ; Leo vanished a few days later and never came back. Did he try to find a house with another dog ? We never knew... In spite of posters all around, calls to vets in refuges, nobody took him back...