In july 2018,  my next door neighbours asked me to keep their two tiny rabbits.

Thomas and Marie-Odile were going on holiday with their kids, hiking, and could not take their furry pets with them.

I was not familiar at all with this kind of pets, and wondered how our border collie and our cat would react : would they chase them ?

Rasta and Rockette were brother and sister . The two have been brought in a very small hutch. I could not stand the idea they would stay 3 weeks in such a small space where they could hardly move ! 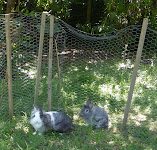 I decided to build a kind of big cage, fenced all around, in order to let them free on the lawn a few hours during the day. They were put back  to their hutch only at night.

I was reading next to them : my own cat and dog were  kept inside but many cats lived around. I wanted them safe and sound.

One day I found Rasta, the male one, with his teeth stuck in the fence.I managed to free him but realized he had very long teeth for a rabbit. He could barely eat ! Teeth were doing harm to his mouth. After a quick visit to the vet, his teeth were shortened in emergency !

Rasta's teeth never stop growing and need to be often cut !! Marie-Odile became very skilled since,  she does the job herself. 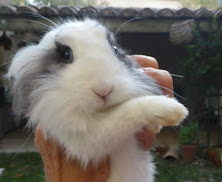 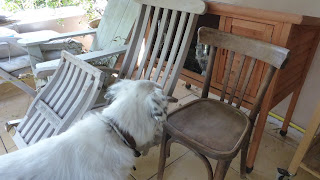