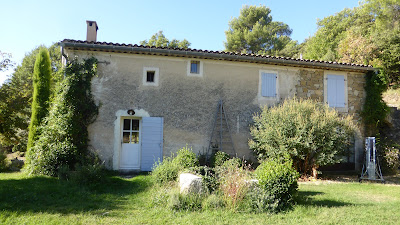 I did not have to go very  far to keep Mimi the cat. François & Valérie's old XVIIth century stoned farm house, a typical architecture of Provence, was only 90 km from our home. In Luberon area.

I did not see Mimi much during my 2 weeks stay, he was often hiding under trees, or chasing somewhere around. 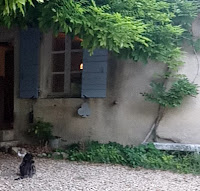 After a few days, I found him sometimes inside, on his masters' bed, but more frequently outside on a garden sofa.

He was a very independent, uncomplicated cat.

My "work" was very light so as there were several fig trees on the property, I made many pots of jam.  Unfortunately François & Valérie did not want many : they disliked sugar... 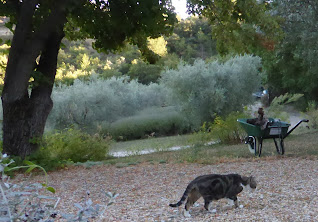 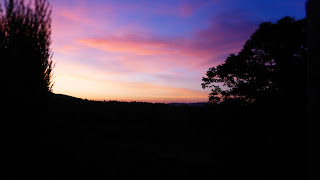 The view from "my "room was fabulous : I often woke up very early (around 5.30 am)  to be able to admire the magic sunrises from the window.
It was a real great pleasure to watch the landscape appear at dawn on this 17 acres estate. 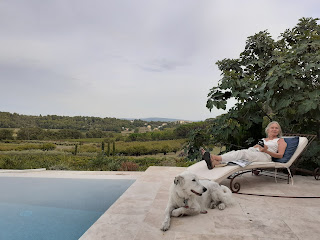 I was not always alone : my husband, Vincent, joined me during a week-end with our dog.

Although Nuage was used to cats, and the owners had suggested I could bring my own pet, I prefered to keep him attached when we were outside.

I ignored what would be Mimi's reaction meeting our border collie, if if he would be afraid or agressive ?

I much prefered to avoid any weird reaction... 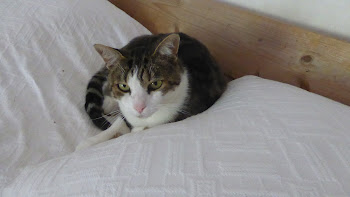 I managed to cuddle Mimi on the couch at the end of my stay but most of the time he kept his distances... I was delighted when he accepted to be scratched on the belly !